What a time we are having in Missoula!  After our fishing in the Bitterroot and our float trip on the Blackfoot, we were told by the fly shop another great place to go was Rock Creek.  We were whipped after our float so we decided to make the next day a recon trip to check out the creek, the access points, have a picnic, and drove all the way up the creek and popped out near Phillipsburg for our return to Missoula.  We were really looking forward to fishing it later in the week, it really looked awesome, and as an added bonus, even on a weekend it wasn't crowded at all. 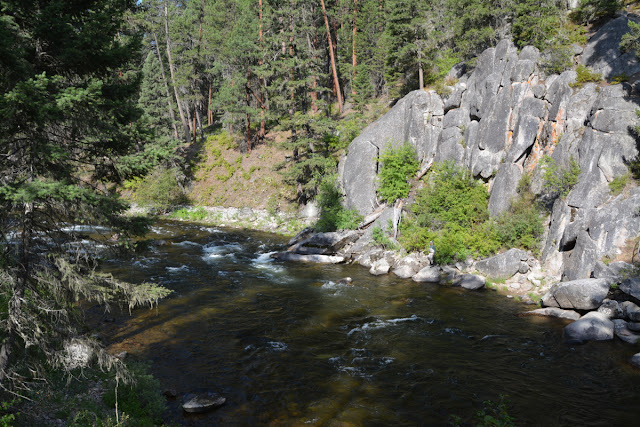 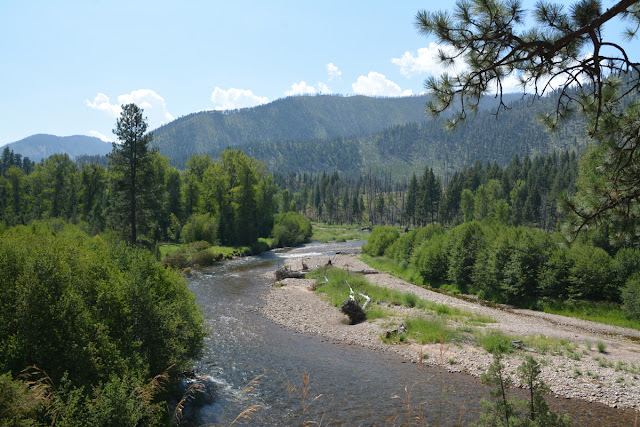 We came upon the Hogback Homestead along the dirt road  a home built in 1917 and is now available for rent.
I should mention that it is fire season here in the west and the last week has been very smoky, in fact you can see some of it in the picture above.  It's pretty thick, but right now it hasn't affected Jan or I.  We can just imagine how much the views would change with clear air:-(

We took another venture up north to St Ignatius to have lunch and complete a loop through Jocko Canyon over towards the Jocko Lakes, then Placid Lake, then by Salmon Lake, down 83 to join with 200 along the Flathead and back.  Funny, about halfway through, we came upon a fork in the road with a dilapidated house and we both said in unison, "wow, we've been here before!".  But I have to admit I didn't remember the cliff side road along the Jocko Lakes, a little bit scary.  Yes it does run together after all these years of traveling and exploring the back country. 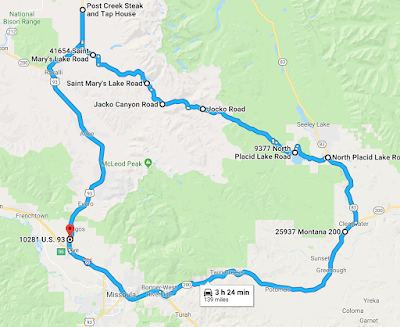 We had only been back for a little while when Jan's sister Karen and Tom arrived.  They got settled in and we had a wonderful evening enjoying cocktails and dinner, and catching up.  Tom mentions, unbeknownst to us that he has a cousin, Tim that lives just south of town and he and Sue had invited all of us to come over for dinner the next night!

So the next day we explored Missoula a bit, and had a nice lunch and later headed down south for dinner.  We met Tim and Sue at their lovely over 100 year old home about 20 miles south of Missoula.  What an idyllic setting, mountains in the background, gardens, and pasture nearby and they have made their backyard a beautiful oasis.  They welcomed us and asked if we'd be okay with elk steaks for dinner.  Jan and I almost jumped for joy, and then we found out it was elk that Tim had hunted, and we did jump for joy, and let me tell you, they were absolutely delicious.  I told Tim I may have to move here and hunt elk myself they were so good.  We had a wonderful evening.  Thank you so much Tim and Sue!!
The next day the four of us went to the Smokejumper Center here at the Missoula airport and took an interesting tour. 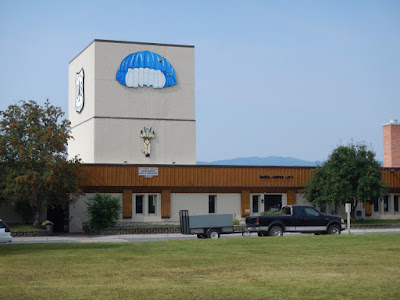 There are 75 smokejumpers based here, and these brave men parachute into remote areas to fight fires.
It was great and we built up an appetite so off to lunch we went.  Later that day we each took off in separate directions.  Karen and Tom went to the National Bison Range that was set aside by Teddy Roosevelt in 1908 as a permanent range for bison.  They said it was beautiful and would have been a lot better without the thick smoke.  We went north and west out along the Flathead River to where it meets the Clark Fork near St Regis.  A pretty drive although the smoke was fairly intense.


Another very important appointment was attended to, and that is Jan's haircut.  She works hard to figure out where and when to get this done and it's often a pig in a poke finding a salon.  She had a terrible experience at her last place in Buffalo and was a bit anxious about this one.  Well, I can report it turned out great and she was much relieved.

The next morning was our morning to go fish the Bitterrroot again, and we were all set and taking stuff out to the truck when we each thought we smelled propane.  Not a good thing.  We opened the compartment and sure enough the smell was strong.  I turned off the tank and then we tried to find where the leak was.  I have a propane sniffer and it was going crazy, but it was only after soaking it with soapy water did we find it was a hose fitting itself on the hose between the regulator and the tank, way better than a leaking regulator which I thought at first.  Good news, after I fought to get it off, yeah dumb me didn't think about the fact propane fittings are reverse thread, we found a propane shop not 5 miles from the campground that made me up a new hose with fittings in about 15 minutes, and best of all it was only $15!

Well, that little project kind of changed our plans, so we just drove down to Hamilton, a very cute town about 45 miles south of Missoula and met Tom and Karen there for lunch.  After, since it was too hot to fish, we poked around town and found there was way more there than we guessed.  It is vibrant, has many historical homes, a nice little downtown area, and the views are fantastic.

So just like that, Karen and Tom's visit was over, and they left early and after saying goodbye we went over to fish Rock Creek.  Murphy's law, as they left the smoke did to.  We had a great day on Rock Creek, Jan caught a couple and I caught one, but we had bite after bite, we must have been just off with our fly selection.  Nonetheless, we both really enjoyed the day, the river was beautiful, the temps prefect, hardly a soul around, just wonderful! 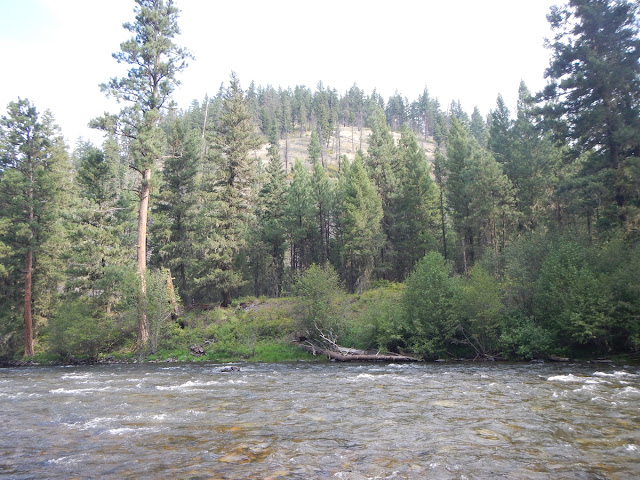 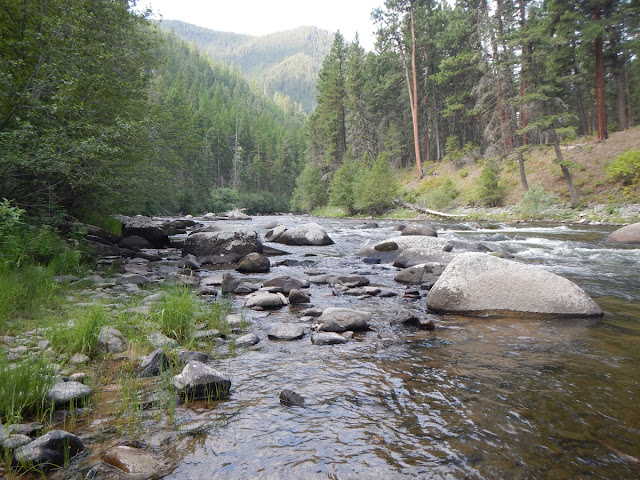 And after a late picnic as the day was warming, we headed back.

And that brings us to Saturday and the farmer's market we had heard about.  We headed over fairly early expecting not much of a crowd and frankly not expecting too much period, and, man, were we wrong.  First of all it was already crowded, the folks here must be early risers, and the market itself was awesome.  Beautiful veggies, lots of vendors, lots of variety, baked goods that were calling us, no we didn't answer, food trucks, home raised meats, eggs, homemade cheeses, butter, etc.  We spent quite some time walking around and bought lots of wonderful, fresh veggies.  Very well done.
On to the surprise.  Jan and I have been extremely enamored with Missoula.  It is in a beautiful setting, not only the convergence of rivers but also of mountain ranges.  The city is fairly large, so we are finding it has anything you need, as well as an abundance of restaurants, shops, grocery stores, entertainment, breweries, and of course fishing.  So we started thinking and wondered if we might be able to extend our visit?  We stopped in the office and asked, and they didn't exactly laugh at us, but explained they were booked solid every night, through the season, and although they might be able to find one site here or there over the next week, it didn't look promising, but they were happy to put us on the waiting list in case of any cancellations.  So we bugged them, I hope not, and stopped in the office every evening as we did our walk, no, no, no.  But a couple days ago, they said an opening came up for 4 days, Monday through Thursday, but we'd have to leave the campground Sunday, and then come back as they were full, full, full on that day, but keep checking nonetheless.  We did, and with no changes we got ready to leave this morning, packed everything up and were ready to go.  We stopped in one more time just before check out and BOOM, the owner said she just had a cancellation, we could stay here tonight and the 4 after, and best of all, we could stay right on our site!!!  FANTASTIC!