Back to the mountains!

After we first caught a glimpse of the mountains it wasn't long until we were immersed in them, and for us that's a wonderful feeling.  It's a bit different here in Montana as the elevations aren't as high and neither are the mountains, but the relative difference is similar so they seem just as big. 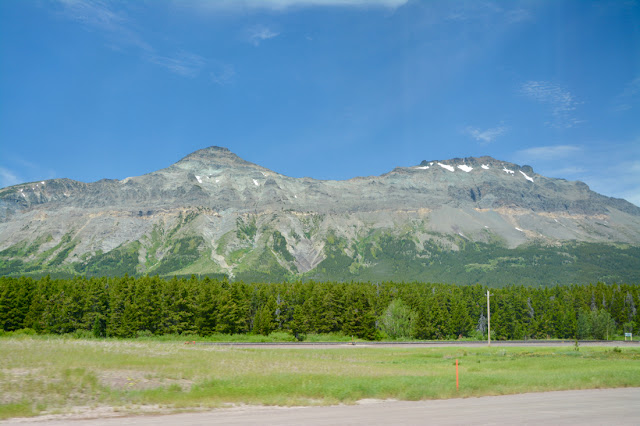 We tried to get a campsite on the east side of Glacier National Park but weren't able to, so after many, many calls we found a newer campground to the west of Kalispell near the town of Marion, MT, called McGregor Lakes.  It turned out to be very nice, very remote with paved roads, enormous sites and thankfully decent wifi as we had NO AT&T or Verizon service there at all.  Even though we had to go farther west than we wanted, it worked out well for another one of our quests.  We are fans of a reality TV show called Mountain Men that follows several different characters as they live out their lives in the country, and one of our favorites is Tom Oar, a former rodeo star that lives with his wife in the Yaak Valley in NW Montana, trapping and tanning hides.  We wanted to go and see if we could find or at least come close to where they live while we were in the area.  First of all we found out it is a long way from anywhere to the Yaak River and Valley, and there is very little there.  We tried to figure out approximately where they lived and that was as close as we came, but it was very beautiful area.  We poked around and had a picnic lunch near a small stream and called it a day.

We were there just a couple days and moved over to Lakeside, MT to Edgewater RV Resort.  We weren't expecting too much from the Google pictures, but were very pleasantly surprised to find one of the nicest campgrounds we have ever been to.  It is fairly small, large sites, all paved, each with a large concrete patio, clean, friendly, walking friendly and in a great location just across the road from Flathead Lake, and not far from Kalispell.  A great campground!

We were only there a couple days as well, before we moved south to spend 2 weeks in Missoula.  We had been to Missoula several times in the past, all before we started fly fishing in earnest, and liked it for the most part, even though we only spent a short amount of time there.  This time we had an entirely different outlook as it is one of the best fly fishing centers in the west with hundreds of miles of fishable water.  We also wanted to look at the area and the town as well.  Missoula is the 2nd largest city in Montana at about 73,000 people in town and 113,000 in the metro area, and home to the University of Montana.  It has restaurants, shops, breweries, parks, and tons of activities, very vibrant.  We have been very impressed so far, everyone we have run into is very positive about the city and the area.

So our home in Missoula is the Jim and Mary's RV Park, a very nice, grassy, well kept park just west of town.  It is mostly pull throughs with large sites and paved roads, and nice to walk around with lots of shade.  A pleasant and well run park.
So of course we had to find some restaurants and found a really good wood fired pizza place, Biga Pizza on our first day.
But we were here to fish.  We visited a couple different fly shops, and got some advice as to where to go to wade and booked a float trip for later in the week.  The Blackfoot, Bitterroot, and the Clark Fork all come together near town, and there are plenty of other waters available like Rock Creek and even the Missouri nearby.  We went to reconnoiter and fish the Bitterroot and decided to go way up river to the confluence of the East and West fork.  Now way upriver is south as the river flows north, so off we went to Darby about 65 miles south of Missoula.  What a beautiful drive, we stopped at many of the access points along the way and found a spot to give it a whirl.


We both had a lot of fun, Jan had a few bites and I caught one fish, not bad, but with the scenery all was great!


Now I should interject something here we stumbled over and had no idea what it was at first.  We have been watching a new TV show called Yellowstone starring Kevin Costner as a rancher in Montana near Bozeman, and really enjoying it.  As we were flying down the road, Jan mentioned she saw a sign on a ranch entrance that looked like brand "Y" that you see on the show.  We figured it was a coincidence and didn't give it a thought until we ran into another fisherman and got talking about the area, and he mentioned did we happen see the Yellowstone Dutton Ranch down the road where the series was being shot?  We never realized that show featuring Bozeman would be shot nearer to Missoula??  He said he had run into Costner in a small diner in town.  Anyway on the way back we tried to get a few pictures.
So then came our float, an all day fishing trip.  We met our guide, Doug, at 0630am at the flyshop and he told us we would be heading for the Blackfoot.  They use inflatable drift boats here on some rivers as there are many rocks and they handle them better than a hard-sided drift boat.  Our other 2 floats were in hard boats, and we were looking forward to seeing how they differed, first of all we found out you stay seated the whole time compared to standing the whole time in a hard drift boat. Turned out for the fishermen there isn't much difference, perhaps the inflatable is a little more smooth.  We drove to the northeast to get to our access point and Doug got us and the boat all set up.
We weren't on the river more than 15 minutes before Jan hooked up a nice fish.
We had quite a day, Doug was a very personable and interesting guide that attended to our needs, gave us a lot of pointers and we both learned a lot.  It was fun, it was beautiful, and it was awesome!

We stopped a few times for a snack, pit stop, and lunch, and got to admire the scenery. 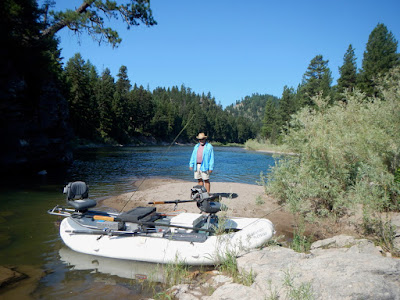 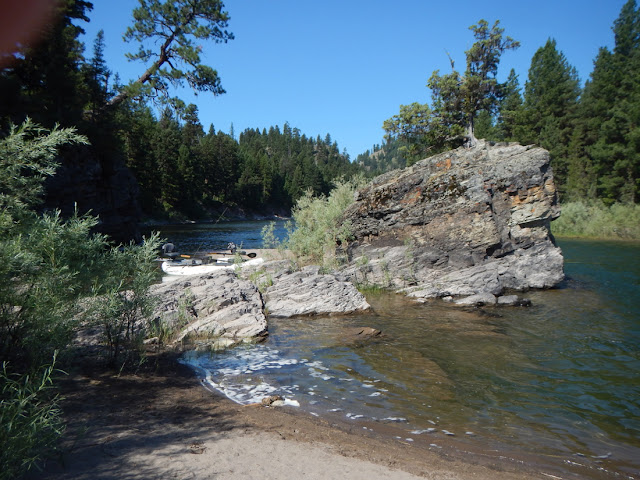 I have a problem evidently, that I don't really want to admit, but I can't seem to hold a fish.  I never had this problem before that I'm aware of, but of late, for some reason I just can't keep them in my hands.  Sad, huh?  Well after I dropped this fish several times, Doug just held it and I hammed it up for the pic:-)
We were on the water all day long, catching lots of fish, we lost count after 30.


So, we have much more to do, we've only been here 5 days so far and we've done quite a bit.  Also we are looking forward to a visit from Karen and Tom in a couple days, should be fun.
Posted by Bill & Jan at 12:41

do you get to keep and eat any of dem fish? Hi to Karen and Tom for us.

No, it's all catch and release. We are going fishing on Thursday and you can keep them where we're going, so we'll see. We will be sure to say Hello for you, we have been having nice visit.:-)