A cool outing then mother nature throws us a curve

So after our time in Benson, AZ we moved over to Silver City, NM.  We planned to go back to the Catwalk and Gila Cliff Dwellings, and of course, Don Juan's Burritos.  We had first been to the Catwalk and Gila Cliff Dwellings back in 2005 when we were working our way to Alaska with Nancy and CT.  CT had gone to school in Silver City so showed us around to include those two places.  We then tried in 2012 but it was closed for fires.  This time we found out it was closed again for flooding and probably won't open until sometime next year if then.  Very disappointing as it was a very scenic hike up along a stream on a trail and catwalks over the water in the gorge.

So we decided to go back to Gila Cliff Dwellings.  They are 44 miles north of Silver City and the first thing you notice is a sign saying Gila Cliff Dwellings -- 44 miles--plan 2 hours driving.  10 years ago is awhile and we didn't remember that.  We maybe cut 15 minutes off that time but it is a very winding, climbing, descending, narrow, yet paved road that you just can't go faster than about 25mph.  But it is very scenic so you don't care.  And when you finally get there, it isn't crowded especially at this time of the year, as the volunteer told us, you really want to come if you go all that way.  It is in the National Park system, and carefully monitored, they explain anything you carry in you carry out, no gum, no colored liquids, no food, and leave everything alone.  It is about a 2 mile loop trail that takes you up a narrow canyon with a pretty little running stream, then climb almost straight up to get on the cliffside where the caves are that the ancient Mogollons built their cliff dwellings inside of.  And what makes this especially great is you can go inside 3 of the 5 caves and really see the construction and architecture of the ruins.

We encountered a javelina just short of the monument.  We haven't seen too many of these strange looking guys outside of Big Bend National Park. 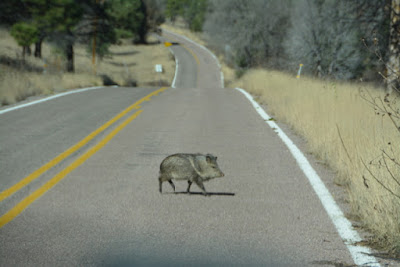 Then across the bridge and into the canyon.  Oh forgot to mention, the outside temp is 41 according to the truck, and in the canyon it is well below freezing.  The ranger told us it had been 15 degrees that morning.  The canyon is deep and narrow so out of the sun it is really cold! 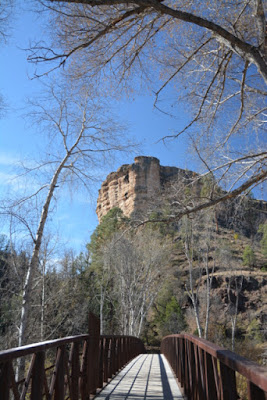 We worked our way along the stream, it is quiet except for the rushing of the water, and very private, there is just enough of a bend in the canyon that you can't really see into it.  It is apparent that this is a sensational location for a dwelling.  Running water readily available, private and secure, south facing, lots of trees around, places to plant gardens, and abundant wildlife for food.

As I said you work into the canyon then up, up you go to the cliff face.  A steep climb to the path along the front of the caves.


The first cave is not much more than an indentation in the cliff, and they suppose that that this was the first place they lived.  The second cave is mostly still intact and although they told us there were several rooms inside, you cannot see in, nor can you enter.

Moving along the 3rd, 4th, and 5th caves appear and they have made it possible to go inside.

Then you can work your way around and climb back out using representative ladders from the times. 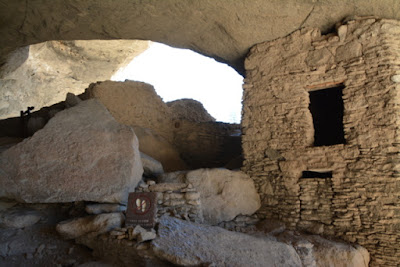 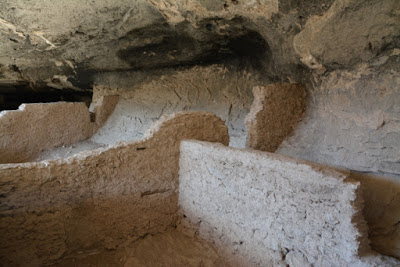 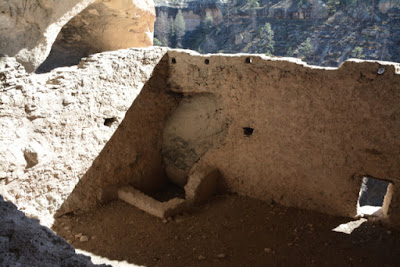 It was a fascinating experience with some interesting observations.  We have been to many, many Anasazi ruins and thought these were the same, not so, the Mogollons were a completely different tribe.  Also with no explanation given they never found a midden, which is a "garbage pile" out in front of most cliff dwellings.  They don't know why or what they did with their trash, and these dwellings were perhaps 45 rooms and 10-15 families, but were only occupied for about 25 years between 1275 and 1300.

We made our way further along the cliff working our way back and found these interesting denizens along our way.

It was very warm in the sun along the cliff, it was very apparent that the location would make for a comfortable spot for a home.  The lower winter sun would penetrate the caves while keeping out the hot summer sun.


I mentioned mother nature, well we got looking at the weather for the next several days.  It called for colder temps, thunderstorms, rain, snow, and coupled with 20-30 mph winds with gusts to 45mph and plunging temps, didn't look so good to stay in Silver City.  We decided to go over to Don Juan's Burritos for breakfast and contemplate our options.  Don Juan's is a small concrete building with a window on one side where you order and pay, then you drive around to the window on the other side of the building and pick up your food.  We both got breakfast burritos with beef, potatoes, eggs, green chili, cheese, all smothered in green chili sauce.  Excellent!


As we ate we decided to run from the weather as best we could and picked Albuquerque as a good option.  The weather wasn't supposed to quite as bad there, no snow, and though windy, not as bad, so off we went.  This way we will get to see family one last time for the year, and it will give us an opportunity to see Vivian again before spring.