As I said we even made a list so we would do all the things we wanted to before we left this am for Taos.  And we really fit in a lot!  Of course food first.  We managed another burger at James Ranch when we stopped in to buy some more eggs and meat after we finished our hike at Potato (Spud) Lake.


We also had to make it back to Rice Monkeys as we won't see any sushi for months and of course to get their awesome Bun and Pho, we actually went two more times, yeah we like it a lot!
We then decided after talking to a few folks that we would make another run to Silverton to see the mining museum, which we were told was one of the best anywhere.  So off we went on yet another beautiful day.  We were surprised to see the color was fading already, evidently the peak only lasts about a week.
We made our way to the museum and wow, it was terrific, can't believe it took this many years for us to go.  It incorporates the old Silverton jail, and shows the actual cells and where the jailor and his wife (cook) lived.  Then there are thousands of square feet of displays about mining, they even have it set up where you feel like you are actually in a mine, with 3 full stories!  Also tons of other displays including drills, equipment, ore cars, and on and on.  It was fascinating.  Then we finally found a good place to eat in Silverton, the Hungry Moose Bar and Grill, and had awesome green chili stew!  Then we headed up to see a couple mines that we hadn't before.  The area we visited was crisscrossed with miles of tramway to move the ore from the mines to the stamping plant that were perched hundreds of feet in the air.  The miners actually used the ore cars to ride up to the mines!  It was an efficient way of moving the ore as it ran almost entirely on gravity, the heavy loaded cars moved down the mountain and the empty cars were pulled back up.

After poking around for awhile we headed back down to Durango.  Now understand the road, Hwy 550, or Million Dollar Highway between Durango, Silverton, and Ouray, as I have said, is quite scenic, narrow, here and there, and is perched on the sides of cliffs with huge drop offs, many times with out guard rails.  As we approached Coal Bank Pass, we came upon two wreckers, one with its cable going down over the steep embankment.  We tried to stop and be nosy but were told to move on, so we went over to the viewpoint at Coal Bank Pass and looked across the valley to where they were working.  Much to our dismay, there were pulling a car, or better yet what was left of a car up the embankment!  It was grim. 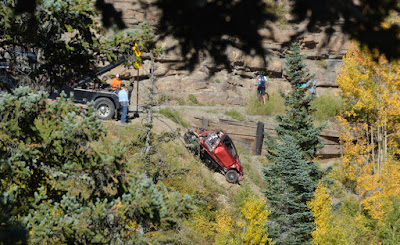 There were no ambulances or other responders, so we figured no one was hurt?  We went back and looked at the local Durango paper and found out a horrific story.  A lady, 49 years old had been visiting her mother in June, and left in a rental car for Silverton and was never heard from again!!  A hiker found the car and her a few days ago by luck as it was totally hidden down the steep bank and covered with brush.  It was not a place that was frequented by people and it was just chance that he found her and the car.  Awful.  Enough of that.

We enjoyed an awesome sunset another evening. 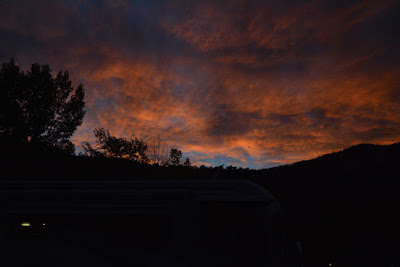 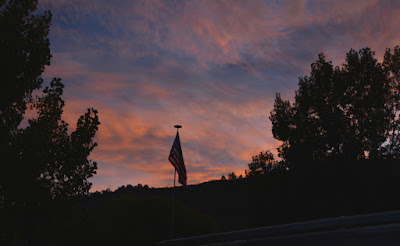 Then the last thing we wanted to do was go back up to Andrews Lake and hike in farther on the Crater Lake trail.  We planned to do it on Friday, but it was cool and there were 30 mph winds forecast so we did it instead on Saturday.  We had a wonderful time, packed a lunch and had a picnic way out in the wilderness, surrounded by beautiful scenery and dead quiet, it was great.  We managed 4.2 miles all together, not too far but you have to remember this hike starts at over 10,000' and we went up to over 11,000', so it is a bit tough, but so worth it.  Crater Lake is 5.5 miles one way and we hope next year to do the whole thing, we'll see:)

After our enjoyable hike we drove over to Molas Lake to have coffee before heading back down the mountain.

Now we bid adieu to Durango and head down to Taos to visit with Karen for a few days before moving to Santa Fe.

Often the accidents over the edges there, they don't even try to winch the vehicles back up the hill and leave them at the bottom. How can you leave the high county prematurely? You haven't been snowed on yet, must stay until you are whited.